Menu
You can almost smell the fresh-cut pine logs and the sweat of lumberjacks as you watch them jiving to a traditional folk soundtrack. The young circus troupe hails from a small town called Saint-Alphonse-Rodriguez and they have clearly drawn upon their country roots to find inspiration and energy for this unique creative project. Timber !, is clearly off the beaten track. The show’s creators designed unusual acrobatic apparatus inspired directly from the forestry resources available on their real-life family farm. The experience feels and smells authentic. The artists perform incredible feats of aerial acrobatics that are directly inspired by the natural raw materials of the forest and the equipment used on the farm. The atmosphere is hyper-festive. The talented acrobats and musicians create a colourful, energetic scene where we can witness epic feats of agility and strength, inspired by the exploits of the first North-American lumberjacks, loggers and farmers. 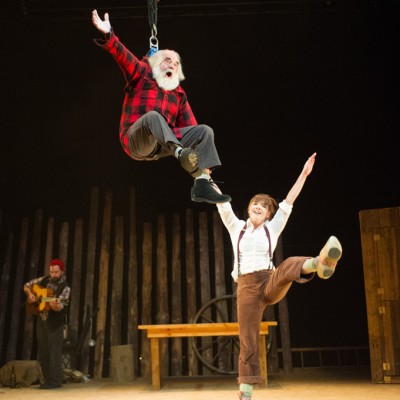 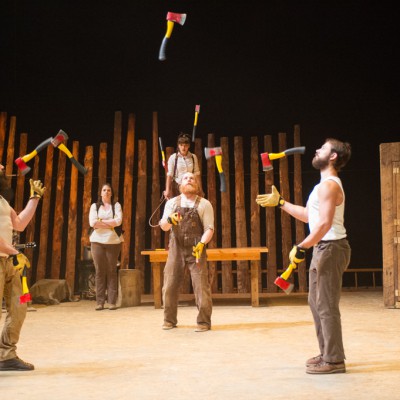 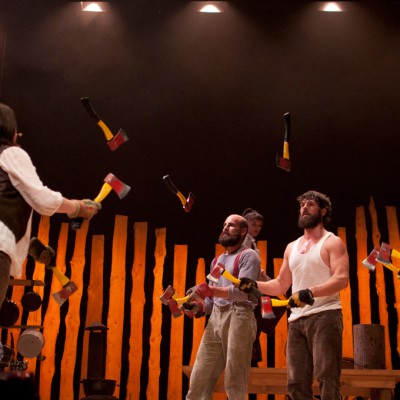 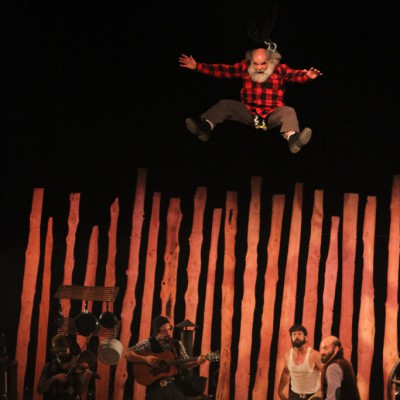 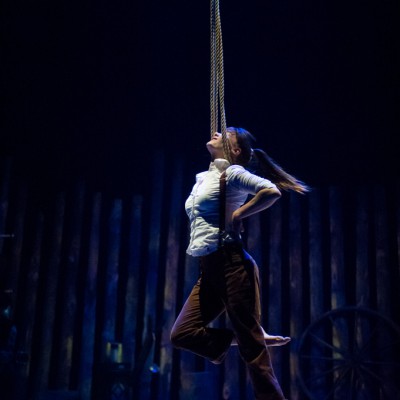 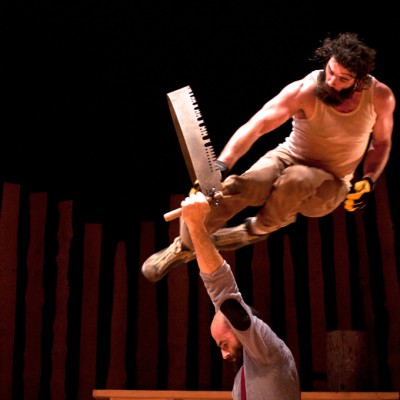 Antoine received his diploma from the École nationale de cirque de Montréal in the year 2000. A multidisciplinary artist and virtuoso, he excels on the German wheel, the Cyr wheel,   general acrobatics, juggling and music. Over the past 11 years, Antoine has collaborated on numerous shows and artistic projects: Cirque Éloize’s Nomade and Cirque Orchestra, Cirkus Cirkör’s show 99% Unknown, the Cirque du Soleil’s Celebrity Cruise Project, Maskarade by the Copenhagen Royal Opera and Traces by the troupe 7 doigts de la Main.

Julie hails from the town of Saint-Alphonse-Rodriguez. At the age of 8 she was initiated into the world of classical ballet, but she later became fascinated by modern dance and theatre. She signed up for the LADMMI contemporary dance school, where in 2003 she received her diploma in contemporary dance interpretation. She went on to dance for noted choreographers Sonia Biernath, Manuel Roque, Mélanie Demers, Amélie Lévesque Demers and for the dance company Bouge de là with Hélène Langevin, as well as the Mandala Sitù company. Julie developed a passion for the tango of Argentina and she loved to sing, until she discovered the circus! In 2007, she left on a European tour with the Swiss circus company Salto Natale, and since then she has participated in several other projects.

Arthur made his debut in Timber! with Cirque Alfonse at the age of six weeks at Festival Montréal Complètement Cirque in 2011. He then toured with Vague de Cirque in Gaspésie in the fall of 2011. Since then, he performed in more than 300 shows in the German cabarets while traveling the world with Cirque Alfonse

At now 3 years old, he is growing up touring with his family, and is always eager to get on stage with Timber!, where every night is a surprise!

From the age of 7 Jonathan has been somersaulting and perfecting his flips in the family garden. From a very young age, Jonathan was a regular at his neighbourhood gymnastics club, and within a few years of coaching he was able to reach competitive levels. He went on to practice this discipline for the next 10 years of his life.

Soon after obtaining his diploma in 2000 from the École nationale de cirque de Montréal, specializing in teeterboard and trampoline, Jonathan flew off to Switzerland to teach the circus arts before joining the Starlight Circus as circus artist and work as Assistant to the Artistic Director during 4 years. Jonathan then joined the Cirque du Soleil where he developed into a highly regarded multidisciplinary artist. In 2007, he participated in the Salto Natale show of the prestigious Swiss circus Knie and he later collaborated on the Trace show presented by the troupe Les 7 doigts de la main.

Francis was born in a small hamlet named Tewkesbury, in the Quebec City region. One of his earlier jobs was on a horse farm where he acquired many different trades, some related to lumberjacks. His love of rafting drove him to become a guide and to be part of the Canadian national team.

Always willing to push beyond his limits and challenge himself, he became captivated with the circus arts and started his training at the Quebec City Circus School where he specialized in hand to hand, banquine and axe handling. He then gained experience with different projects and shows like the 400th anniversary of Quebec City, Ex Machina, Les Chemins Invisibles and Compagnie Rasposo.

Alain was born in Switzerland and his early years were busy with competitive alpine skiing and soccer. He travelled around the world before settling down in Saint-Alphonse-Rodriguez, where he actively participates in the community life of this small town of the Lanaudière region of Québec. Alain is a soccer trainer and a wall paper hanger.

Josianne started studying and practicing classic percussion at the age of 8. After receiving her diploma in Music from the Université du Québec à Montréal in 2001, she went on tour with the musicians Gino Vanelli, Dan Bigras and Isabelle Boulay. During 5 years, she travelled around the world as a musician in Cirque Éloize’ show Nomade. Over the last several years, Josianne has gained much experience in numerous television shows. She was also part of the music group François Roy et les As de la Frime, an up-and-coming rock group that received second prize at the Festi Rock Festival of Richmond. In 2006, she participated in creating Cirque Alfonse’s La Brunante show.

André is a musician and singer from the Lanaudière region of the province of Quebec. This region has been named “the national capital of call and response singing”. He studied Jazz Guitar at the St-Laurent College. He is a founding member of the traditional Quebecois music group “La Giroflée”, with whom he has travelled on tour throughout his native Quebec as well as in Europe, with their recent album J’ai dans la mémoire. In 2006, André participated in creating the first circus show of the troupe Alfonse, La Brunante, including the musical arrangements. Now he is very pleased to join the Alfonse team once again for its latest opus, Timber !

A native of Lac-St-Jean, David is a multi-instrumentalist who specializes in traditional Quebec music.  After discovering the music of other countries, including that of Ireland and France, he decided to focus on the music of his ancestors. In 2010, he earned his college degree study in Jazz-guitar technique and traditional music at the Lanaudière Regional College in Joliette Quebec. Whether on the banjo, guitar, dobro or the violin, David mainly juggles between jazz and old fiddle tunes of yesteryear.

Alain has a Bachelor of Arts in Dramatic Arts from the UQAM in 1986. He first worked as a dance artist and an actor in experimental theatre before moving on to becoming director and choreographer. Alain is interested in the interdisciplinary aspects of art and of the performing arts in his artistic development and creativity. In 1988, he joined the celebrated theatre troupe Carbonne 14 as a performance artist in their show called Le Dortoir. He later danced for several other companies. Alain directed the well-loved show Cirque Orchestra by Cirque Éloize, and he also created choreographies for several dance troupes, among them L’Agora de la danse of Montréal. He also directed Cirque Alfonse’s La Brunante, Timber! and BARBU electro trad cabaret' show.

David studied violin and jazz interpretation at the Saint-Laurent College before joining the traditional music group La part du quêteux, a show which won the Best Album award for Traditional Music at the Folk Canadian Music Awards in 2007. He went on to work with the famous Quebec group La Bottine souriante as a violinist. He joined the Cirque Alfonse in 2006.

Since the day he received his diploma from the theatre program of the Sainte-Thérèse College in 1992, Nicolas has designed more than sixty lighting creations. He has worked with internationally renowned creators and artists such as Robert Lepage, Marie Chouinard, Kristian Fredric, Denis Marleau and Daniele Finzi Pasqua. Recently, Nicolas worked on several creative projects with the Cirque Eloize and the Cirque du Soleil.